after two ducks get into a fight, which never lasts long, they will separate and float off in opposite directions. Then each duck will flap its wings vigorously a few times, thus releasing the surplus energy that built up during the fight. After they flap their wings, they float on peacefully, as if nothing had ever happened.

If the duck has a human mind, it would keep the fight alive by thinking, by story-making. This would probably be the duck’s story: “I don’t believe what he just did. He came to within five inches of me. I’m sure he’s plotting something already. But I’m not going to stand for this. I’ll teach him a lesson he won’t forget.”

And on and on the mind spins its tales, still thinking and talking about it days, months or years later. As far as the body is concerned, the fight is still continuing, and the energy it generates in response to all those thoughts is emotion, which in turn generates more thinking.

This becomes the emotional thinking of the ego. You can see how problematic the duck’s life would become if it had a human mind. But this is how most humans live all the time. No situation or event is ever really finished. The mind and the mind-made “me and my story” keep it going.

We are a species that has lost its way. Everything natural, every flower or tree, and every animal have important lessons to teach us if we would only stop, look, and listen. Our duck’s lesson is this: Flap your wings – which translates as “let go of the story” – and return to the only place of power: the present moment.

where there is love then there is forgiving……
Its really SAD the way we try to understand love from our head based on the judgments & past incidents and so on
come on guys….lets break this pattern & try to reborn ….True love..No more drama 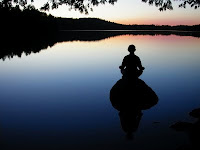 Meditation and Medication differ by one letter only. Medication intends to heal the body and Meditation is to regain the original qualities of energy running your body; which is Soul.

How to let go? I say just do it, just drop it, the problem in this is Attachment, Thoughts keeps coming back because of actions taken or memories or experiences & so on…
Just do it by dropping it …keep your eyes open & see that thought falling down & say, it just dropped…breathe

what if there is love, but religion comes in the way, what is this……..how do you describe love in this?

love is love…religion is a system created by humans….we kill people based on religions….IS killing act of God on the name of God?

There is no suffering in True Love

Angel of death comes and ask ” did you live? did you love?”
You lose if you say NO
You win if you say YES, I did love…Yes, I did give unconditionally
Remember that angel now and bring the feeling of compassion , true love ♥